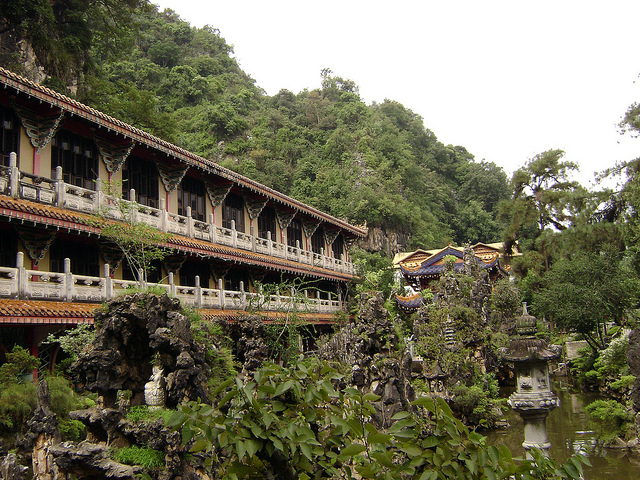 This article is from Travel Wire Asia website. Written by Chris Wotton on 1 October 2012.

For the full version of this article, please visit the following website:

HISTORICALLY known for its valuable tin mining industry during the time of the British Empire, Ipoh is probably better known today for its Hainanese chicken rice dish. That said the tin connection remains to this day – the name of western peninsular Malaysia’s Perak state, of which Ipoh is the state capital, means ‘silver’ in Malay, a reference to the colour of the tin.

There is a strong Chinese influence on the city’s architecture thanks to the 70 per cent of the population who are of Chinese origin, as well as clear colonial influence too, which makes Ipoh a popular stop for travellers to Malaysia, particularly those heading onwards to the Cameron Highlands. And with a bit of planning, you might just be able to squeeze the highlights into 24 hours.

Start by putting things into context by taking in some of the impressive architecture in the old town on the west side of the Sungai Kinta river – it won’t take long for you to discover its olde worlde charm. The rows of old colonial shop houses won’t survive forever, but while they are there film crews are taking advantage of them to shoot period productions, and you should follow their lead and make the most of the atmosphere. The tourist office has a map that will guide you along a heritage walk of Ipoh’s past, revealing its grandeur. The walk kicks off at the train station, which is breathtaking in itself – locals refer to it as Ipoh’s Taj Mahal! Don’t miss the town hall and court house opposite – all three are the work of the same architect.

Cave visits can make for a popular pastime in Ipoh, too – there are enough of them! In the southern part of the city lies the largest cave temple in Malaysia, Sam Poh Tong. A reclining Buddha and artworks await inside, while in the gardens you can release turtles as a merit making gesture.

Things move a little slower at the similar Kek Lok Tong, a little more off the beaten track than Sam Poh Tong, while slightly north of the city the Perak Tong temple is a maze of Buddha statues plus a staggeringly high Buddha image at the front. You will not fit all three of these cave temples into a day visit, but you won’t go wrong picking any one of them. If you are pushed for time, stick to the city boundaries and check out Sam Poh Tong.

As hunger begins to strike, make the most of the fact that you are in one of Malaysia’s foodie hot spots. Ipoh is famous for Hainanese chicken rice, the same dish common all over Thailand as khao man gai, but the city also does a good job of chicken or pork satay and a bunch of curried noodle dishes – like the killer ones at Restoran Xin Quan Fang on Jalan Sultan Iskandar Shah (get there early, they sell out fast!) Ipoh also sports a branch of Old Town White Coffee, where you will find what in this author’s view one of Malaysia’s best servings of nasi lemak, perhaps the national dish comprising chicken rendang, hard boiled egg, cucumber, fluffy white rice, crunchy nuts and – at this place – a good helping of crispy poppadum. 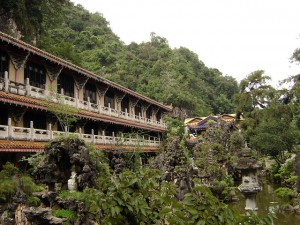 Wind up the day with a visit to nearby Muzium Darul Ridzuan, housed in an old Chinese tin miner’s early twentieth century villa and within walking proximity of the train station. The museum provides a wealth of insight into Ipoh’s role in that industry and the city’s more general history.

Ipoh lies around 125 miles (200km) north of the Malaysian capital of Kuala Lumpur, and is easily reached by bus or train; Firefly also connects Ipoh by air to Singapore in around an hour and a half.

This article is from Travel Wire Asia website. Written by Chris Wotton on 1 October 2012.

For the full version of this article, please visit the following website: