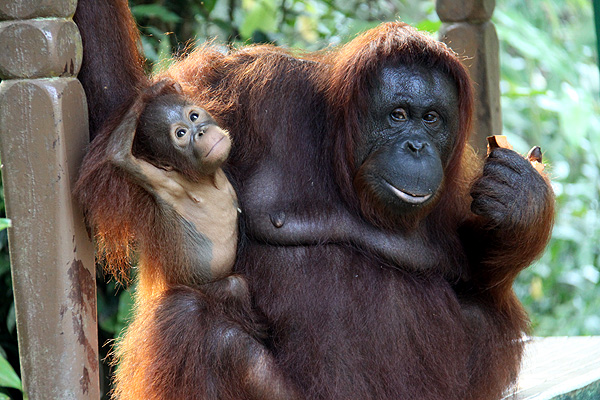 Borneo is famous for its orangutans and the highlight for many travellers here is to see them in the wild. While it is possible to join trips going deep into the jungles of Sarawak and Sabah, these can be expensive and while there are an estimated 20,000 or so orangutans in Borneo there’s no guarantee you’ll actually come across them.

Orangutans are naturally shy creatures and live solitary lives mostly up in the trees so it can be hard to come across them. 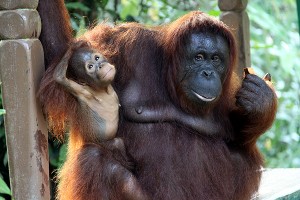 Orangutans are mostly arboreal, meaning they live in the trees. Picture: Joanne Lane.

So many short on time that want guaranteed sightings will visit places like the Semenggoh Rehabilitation Centre, just outside Kuching (Sarawak) or the Sepilok Orang Utan Sanctuary near Sandakan (Sabah).

I visited the former during my visit to Kuching as I was very keen to see these “people of the forest” – the direct translation of the name Orang Utan. What’s important to note about the orangutans at Semenggoh is that while they aren’t purely living in the wild, they are largely free to come and go as they please.

Food is provided twice daily to supplement their needs as there simply isn’t enough protected forest left for them to roam. Apparently large adults will naturally roam a large area of forest each day just to find enough to eat, so without the supplemented diet at Semenggoh there wouldn’t be enough food for them all.

Orangutans are of course an endangered species and thankfully protected by law in Malaysia. Authorities have been trying to counteract their loss of habitat, and the live animal trade, that has decimated their numbers, by setting up these rehabilitation centres.

We had a car and driver to take us to Semenggoh from the hotel in Kuching as there were quite a few of us. This saved us a 20 minute walk from the gate, as the public bus, number 6, only drops you at the entrance. It also returns at 5pm so you have to watch the time if you go in the afternoon.

It is best to visit during the feeding times which take place daily from 9-10am and 3-3.30 pm. There’s usually a considerable crowd gathered for these so it’s not a completely unique or camera free experience, but once the orangutans start arriving you forget about everything else.

Around 9am workers at the sanctuary started putting out fruit for the primates. This seemed to be predominantly bananas and pawpaw but apparently they are fond of figs, eggs and even the pungent durian. For awhile we all stood there with our gaze skyward to the trees hoping to catch a glimpse of them.

Before long the first of the primates appeared – its long reddish hair distinct against the green foliage of the trees. It was a confident adolescent male and it worked its way along a well placed rope with incredible agility until it could reach down and pick contentedly at the offerings. It seemed unfazed by the crowd gathered nearby.

A mother and baby at Semenggoh. Picture: Joanne Lane.

Minutes later a mother and baby arrived. The youngster seemed almost dumbstruck by all the attention and gazed at us with wide eyes, hiding intermittently in its mother’s hair. Meanwhile mum herself barely blinked at the waiting audience while she took the offered bottle of milk and sucked away. They seemed almost human in some of their mannerisms and it was easy to see where the name “person of the forest” had come from.

By this stage more and more orangutans began to appear—1, 2, 5, 10… I lost count—and what had originally been a large group of 30-plus tourists began to dissipate as people wandered off to follow a particular primate.

We had been instructed about how to behave around the orangutans and not to give them food, smoke in front of them, touch them or get in their way. At times it was impossible to follow the last of these instructions as occasionally one of them would simply appear within metres of the made paths, above you in the trees and occasionally on the path with you.

When they did come to ground they lumbered along in an almost comical way, babies clutched to their chests, but would then suddenly swing gracefully up by a branch and disappear above you.

There was a notice board in the vicinity that listed the names of each one and some of the park wardens pointed them out when they appeared. There was Ritchie, Rose, Anaku, Selina, Murray and many others. Their date of births were given and their age and mother, if known.

When the food ran out soon after 10am, and they were contented with the feast, they began to leave just as they had arrived. One by one they flitted off into the trees; there would be flashes of red hair here and there and then they would vanish behind the leaves, exactly like people of the forest.

This article is from Travel Wire Asia, written by Joanne Lane.

The full article can be found here: