London Things To Do, Travel Reviews

The Fitzrovia Radio Hour will uniquely entertain you on what it’s like on a live radio hour show. They write the scripts themselves and each show usually has 3 short radio dramas just like they were in 1940s radio – before television was around. Laugh and gasp at the way the sound effects are made and their facial expressions.

The show is complete with fictional sponsored ads which the team obligingly also act out. The team also are aptly in period dress and really do a fabulous job. Of course, their fabulous English and impersonated accents also go a long way and add to the authenticity of the show.

For £10, it’s a really great cheap night out in London, especially if you’re looking for what to do. The venues they perform in are usually quite cosy, so you’re not far from the action/comedy! 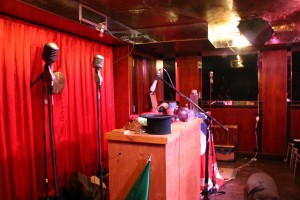 Set/Stage of the Fitzrovia Radio Hour at The Last Days of Decadence in Shoreditch, London

Last year I enjoyed the show so much at the Last Days of Decadence in Shoreditch, I went to it again before their 2 week season had finished. They regularly write new scripts so you won’t see the same show twice. I wish I could be in London to see them next week as they’re performing in London as a warm up before the Edinburgh Fringe Festival.

I can’t adequately express how awesome this show is, you really must go and see for yourself, it really is a great night out in London. So if you’re looking for what to do in London, check them out. For a better idea, they have a spiffing YouTube clip – click below:

They usually perform in London. They are just fabulous! Don’t miss out on seeing them, I don’t know anybody I’ve taken that hasn’t enjoyed it. It’s just so enjoyable and different!